A day with Wakefield Trinity

In February, I had the fantastic opportunity of being able to watch Wakefield Trinity train for their upcoming game and I can definitely say that they put a lot of effort into it. They performed a variety of different exercises aiming to improve their skill. David Fifita stood out especially, but credit must be given to the entire team as they all put all they could into it.

Outside of training, who would you say is the best player?

I’d probably say Jacob Miller, he’s one of the best in training and I spend a lot of time with him away from the field as well.

Who is your closest friend on the team and why?

I’ve got a few, probably Reece Lyne would be one of them, he’s been here for the same time as I have, we’ve been 8 years here together and I spend a lot of time with him and spend days off together as well.

Did you ever see a dark time in your career?

Yeah, I’ve had lot of dark times, the start of my career was pretty hard and I’d got released by the Wakefield academy when I was 16 and I had to go back and play amateur. So I played that until I was 18 and then, luckily, I got a chance to play at Featherstone which was really good. Probably the hardest time in my career was when I got to Wembley with Huddersfield Giants and I ruptured my cruciate ligament a week before the Challenge Cup Final.

How old were you when you started playing rugby?

I first started when I was 7 at Stanley Rangers and went through the age groups until I was 18, and then I signed semi-professional with Featherstone and full time professional at Huddersfield when I was 21.

Who was your role model and why?

Same as everyone really, I looked up to parents and things like that, my mum and dad used to take me training whenever I needed and do everything for me and then when I was young at Featherstone players like Stuart Dickens really guided me through those early years.

What tip would you give a young person looking to succeed?

It’s a bit cheesy, but always follow your dreams and don’t listen to people telling you that you can’t do something. There’s always an opportunity for you if you work hard enough at it.

I experienced that myself when a lot of people said being a professional rugby player is not a career, you need to work hard at school and get a proper job. Luckily I worked hard at school as well which is obviously really beneficial to you in later life, but I also worked hard to become a professional rugby player as well and I got the chance to live my dream by doing that.

In February I watched a professional rugby training session.  During the session, the players were running in and out of cones and preparing for what might actually happen in a rugby match.

They also did defenders against attackers, which was where the attackers had the ball and the defenders had to stop them from crossing the line.  Watching a professional rugby match was mesmerising and amazing.  This was because I have never seen a rugby training session and it was an amazing thing to watch.

Who was your hero when you were younger?  Why?

If rugby didn’t exist, what sports would you play?  Why?

Um, if rugby didn’t exist I would like to play golf, it’s a relaxing game.

How old were you when you started playing professional rugby?

Well, I came in for the West Tigers in Australia at the age of 18, I started playing professionally at the age of 17, however I didn’t play my first game until I was 18.

Have you played in any other clubs than this?

I have been to a few clubs like the Sydney Roosters.  From 17 to 20 I was at the West Tigers then from there I went to Hull FC and then in 2015 I came to the Wildcats.

Have you had any injuries?

I have had a few minor ones. I have had my groin done and I popped my shoulder, also I broke my leg about 8 months ago. Still I was only out for about 12 weeks, nothing season long so touch wood!

What is your biggest success at Wakefield?

I think, nothing in particular, we made the Challenger’s Cup semi-final, but the way we turned things around from the first year when facing relegation – we turned it around by making the top 8 then the top 5.

What is your prediction for this season?

I predict that we will be in the top 5 that means we can get a shot at being in the finals!

First of all the players started warming up.  All of the warm-ups were from one side of the pitch to the other.  They started lunge walking to stretch out their quadriceps, hamstrings and glutes.  They did this twice, then they had a pulse raiser of high knees by sprinting from one side, having a break then sprinting back.  After all of that they lined up one by one they all did a full lap of the pitch.

After the warm-up the players went into the formation and started playing as if it was a real match.  They also started kicking the rugby ball at the crossbar to test their accuracy.

How old are you?

Besides Wakefield Trinity, what team is your favourite?

Hull FC because I used to play for them.

A friend asked me if I wanted to play, and I have stuck with it ever since.

Are there any other people who play in your family?

No, my sisters used to play but they both have bad knees.

Who is your favourite player on the team?

Bishop and Tommy, they are both good mates. 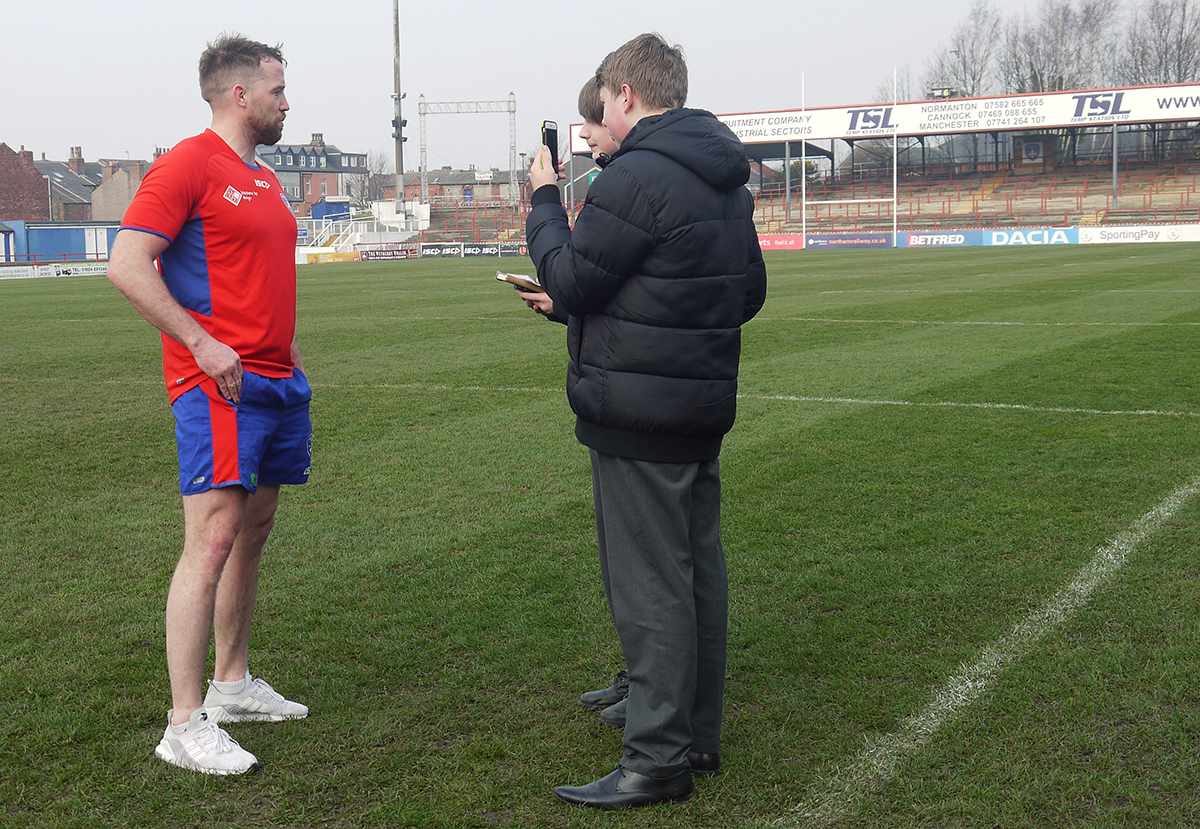 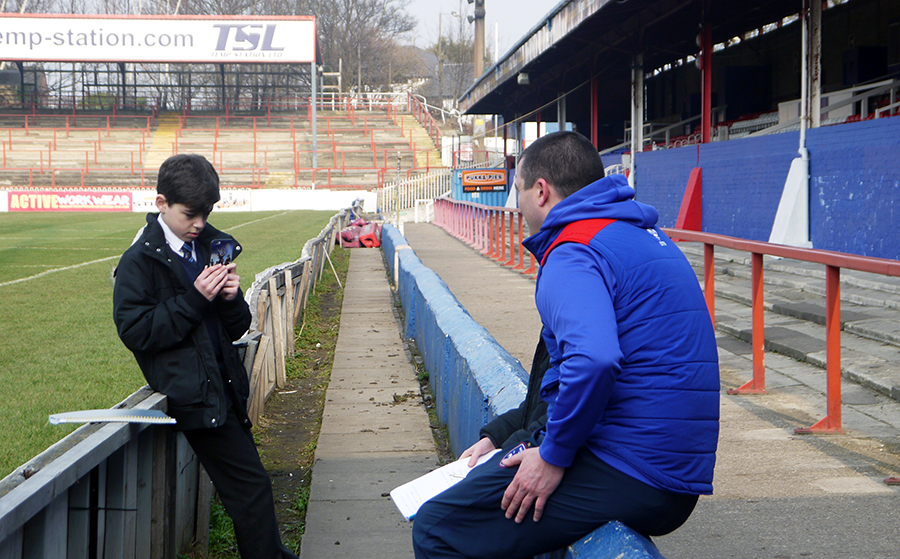 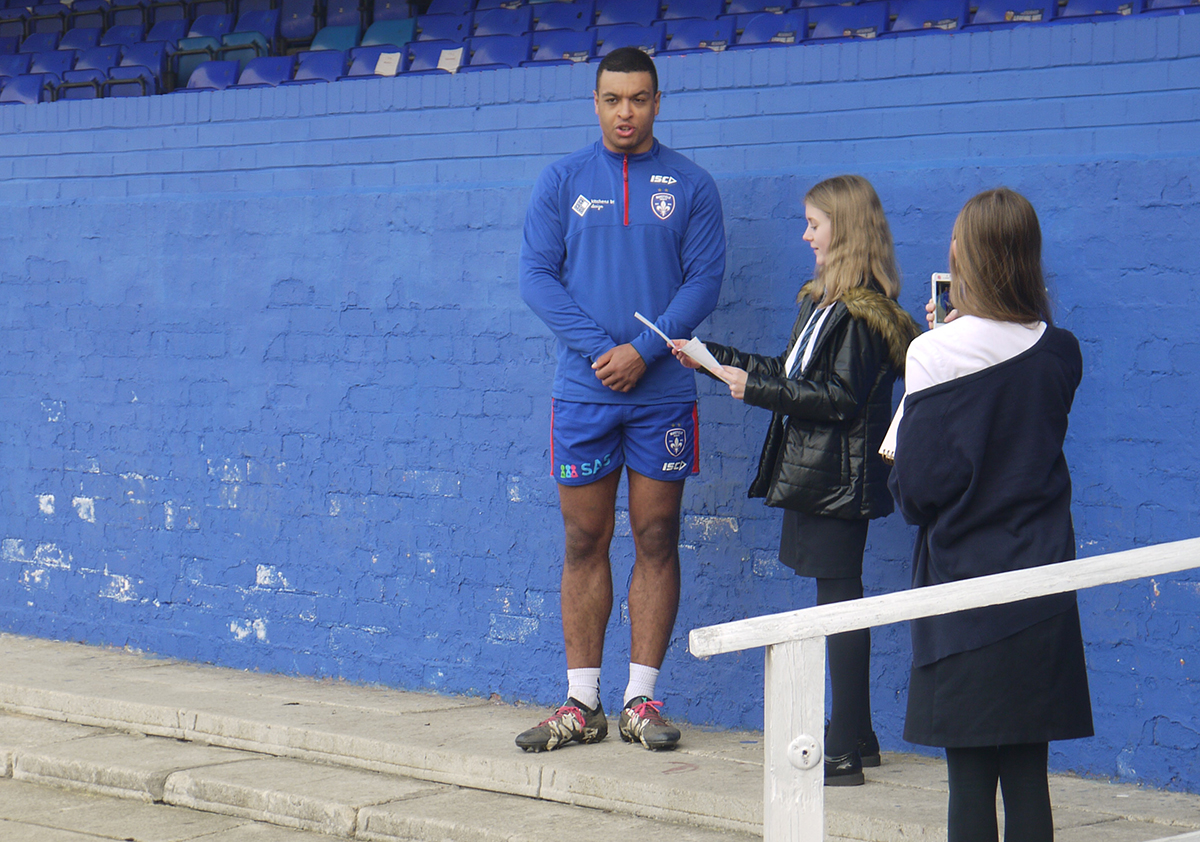 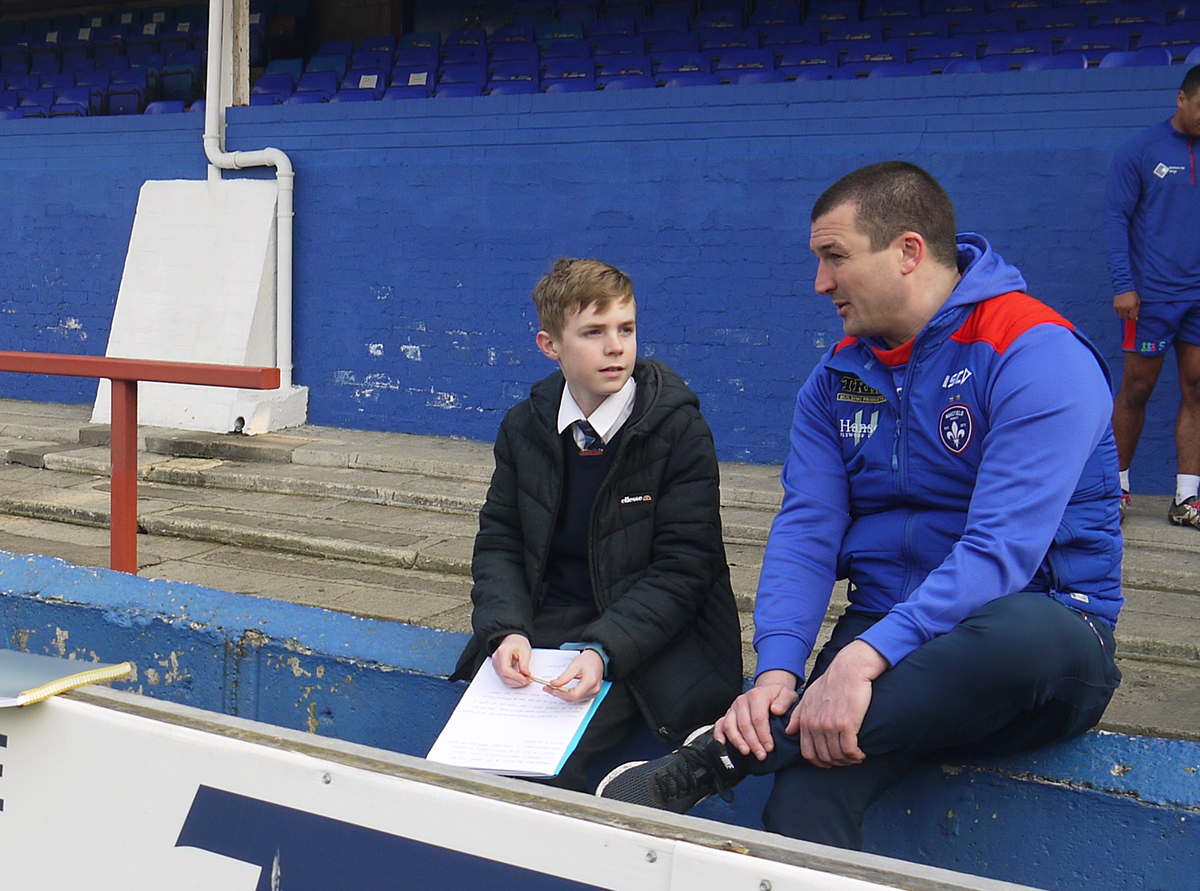 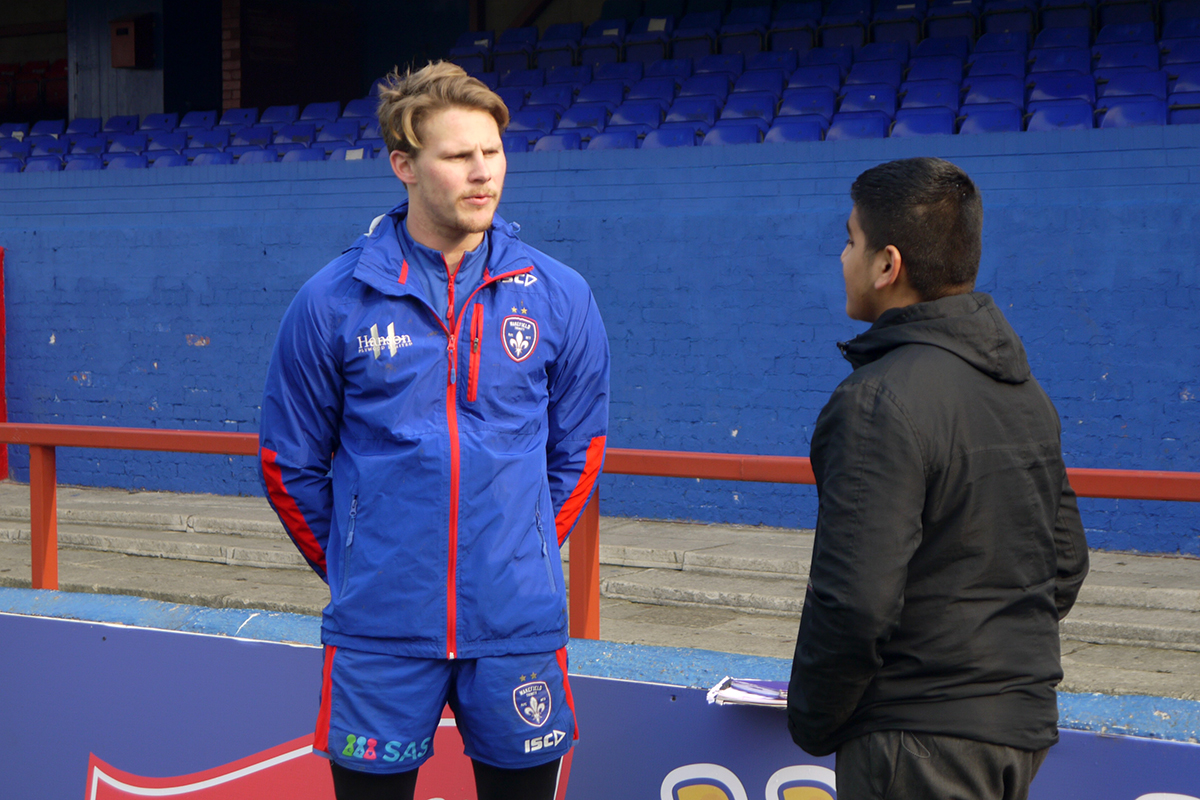 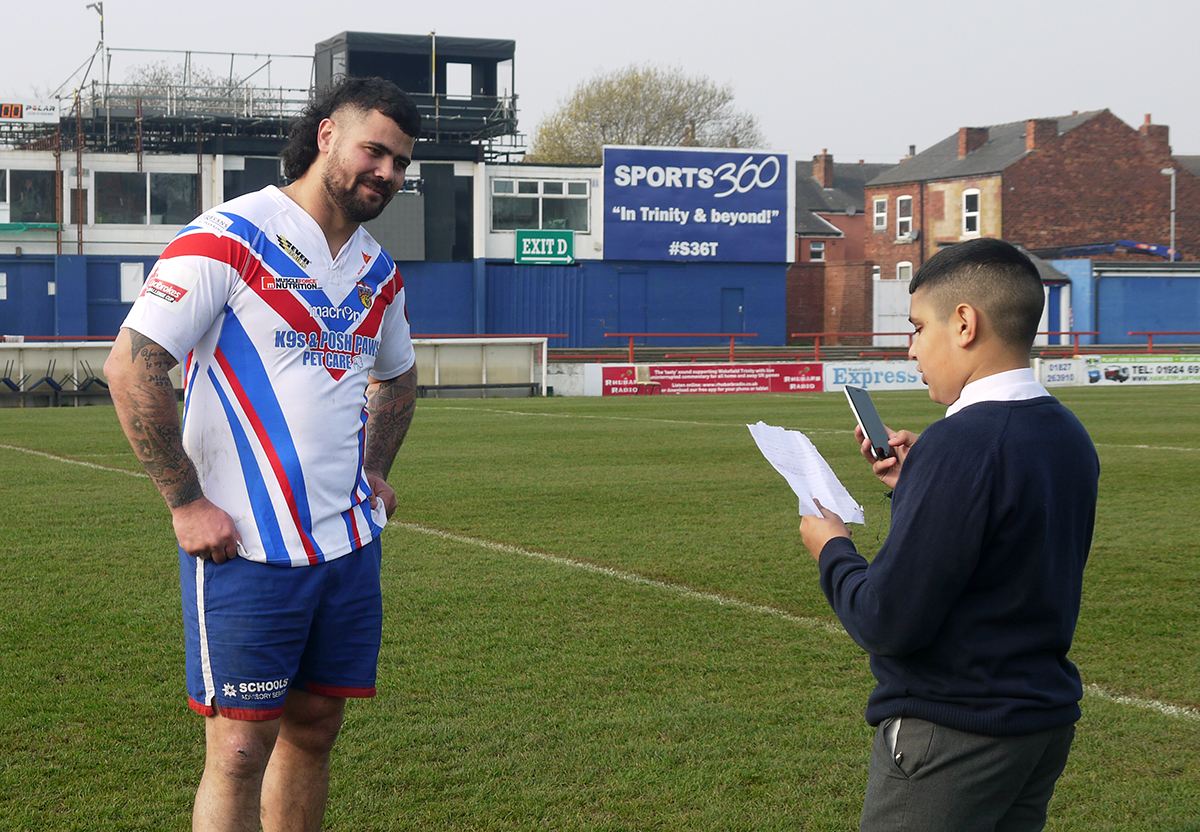 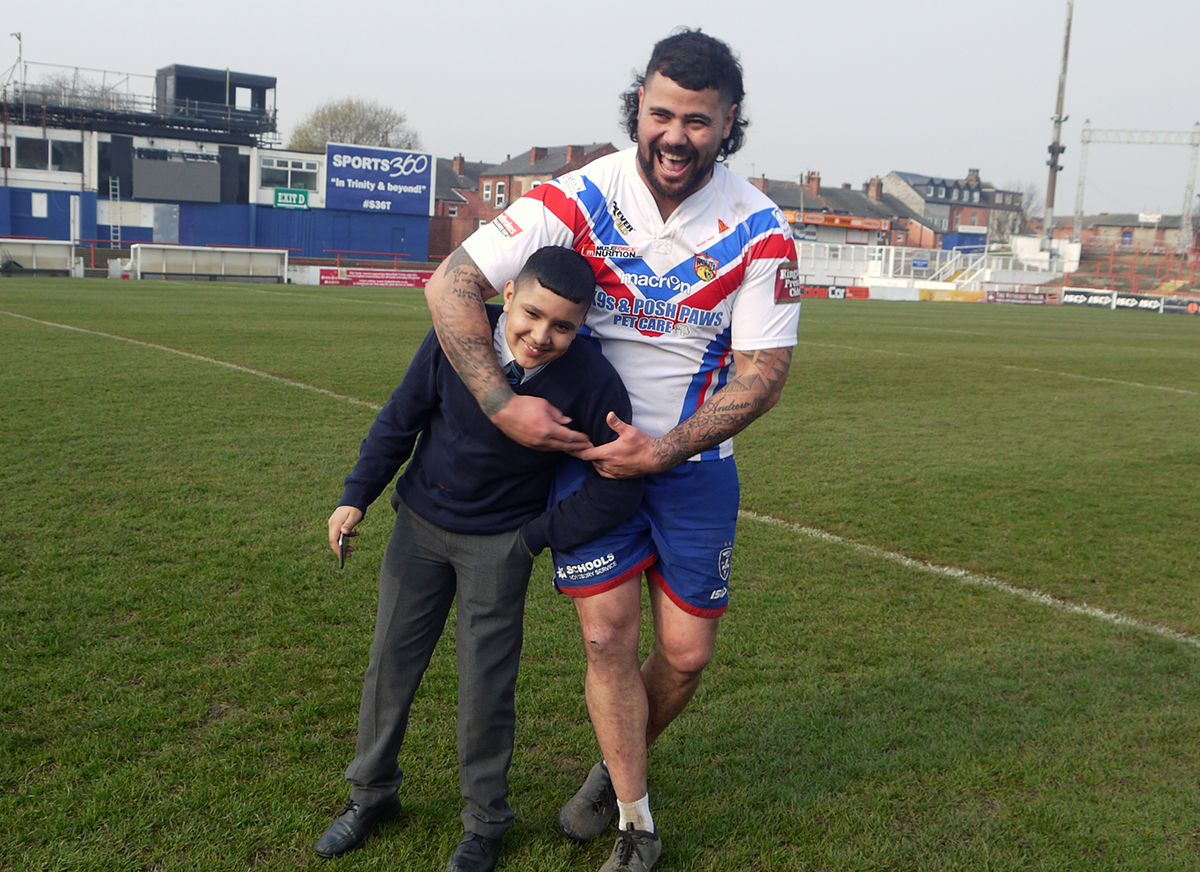